Within Sage Mountain’s abundant network of streams, pools and seeps, the Rich Calcareous Type III Fen stands out as its most notable and rare wetland.

What is a fen?

A fen is a peat-forming, permanently saturated wetland fed by upwelling groundwater.

A fen differs from a bog in that fens draw their water from ground sources, while bogs accumulate water exclusively through rainfall—though these two types of peatlands can frequently coexist along a continuum. The peat in a fen is like a permanently soaked sponge.

Fens have slightly acidic to basic mineral-rich waters from groundwater discharge and seepage. Fens may be flat or gently sloping and are dominated by sedges, grasses and “brown” mosses (non-sphagnum mosses.) There are three main categories of fens: poor, intermediate and rich. These fen types are mainly distinguishable from each other by the amount of mineral enrichment in their groundwater, with a resultant difference in acidity / alkalinity pH of the surface water. This results in varying depths of peat accumulation with a different matrix of highly specific plant species in each fen, making them hotspots for biodiversity and rare plants. 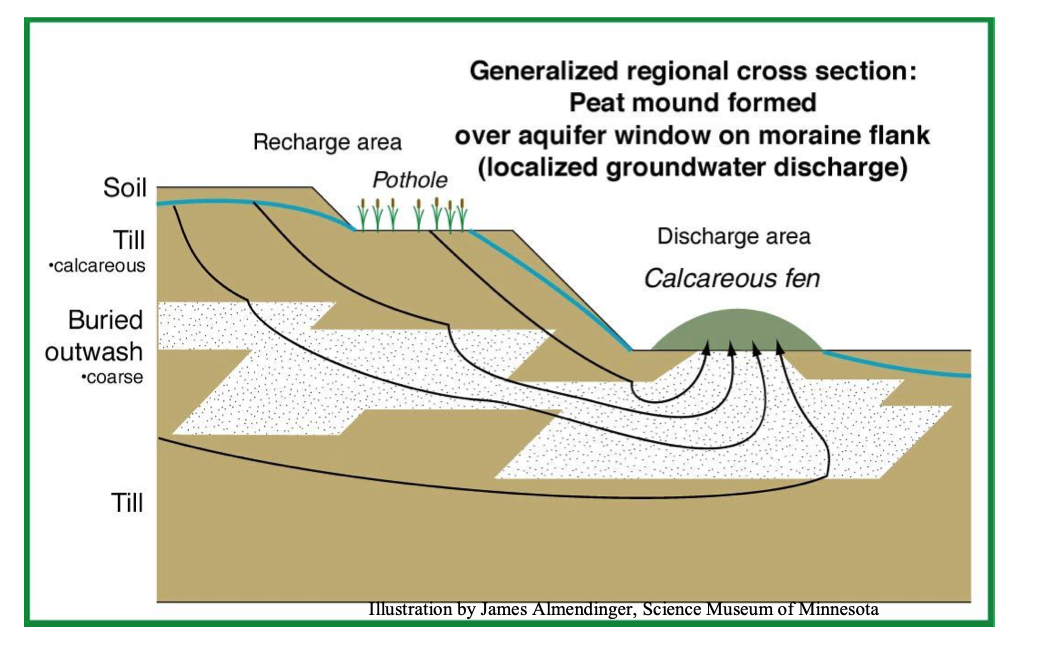 What is a rich fen?

The Sage Mountain Rich Fen is the most enriched mineral open peatland classification. Rich fens are known to support high levels of botanical diversity, resulting from the naturally open conditions and the constant seepage of calcareous groundwater. These fens occur only in areas of calcium or carbonite-rich bedrock. They typically occur on a perceptible gentle slope and have shallow peat accumulations of less than three feet which stay saturated throughout the growing season.

Calcareous fens are a subtype of extremely rich fens and are notable for their rarity, their unique water and mineral makeup, and their high incidence of endangered and rare calcium-loving plants. Because of their unusual conditions, calcareous fens tend to host populations of plants not often seen anywhere else in the wild.

Species with a state status of Threatened or Endangered are protected by Vermont’s Endangered Species Law.

Calcareous seepage fens are among the rarest habitats in the United States, with only 3 fens officially registered in the state of Vermont. Fens are particularly vulnerable to disturbance, with high sensitivity to groundwater changes and a soft peat surface easily impacted by humans or livestock. Habitat disruption allows invasive species to move in and eventually out-compete the threatened species of the fen, resulting in the permanent loss of a local population. Peat accumulates very slowly; fens can take thousands of years to form, but without protection, they are especially at risk for rapid habitat destruction.

Why do calcareous fens need protection?

Wetlands are ecological super-centers, comparable to reefs and rainforest. They offer water quality protection and filtration, groundwater charge and discharge, a safeguard against bank erosion, and flood control. Biologically, wetlands are among the richest and most interesting ecosystems. The dense vegetation found in wetlands provides a variety of foods, nesting sites, and wintering habitats that are relatively safe from predators.  Wetlands occupy only 5 to 10 percent of the land area in Vermont, but they provided necessary habitats for the survival of a disproportionately high percentage of threatened and endangered species in the state. Wetlands once made up 3 percent of the Earth’s surface, but much of that area, especially in the Northern Hemisphere, has been converted to other land uses. The lower 48 states have lost more than 50 percent of their wetlands. Today the escalating climate crisis and its associated changes in water quality threatens fens even further.

Calcareous fens are the rarest community subtype of an already-vulnerable habitat classification. Vermont’s calcareous fens formed after glacial receding 10,000 years ago, making them a primeval and irreplaceable facet of our state landscape. Protection of fen communities requires conservation of not just the small surface watershed, but also the area of groundwater recharge to the fen. At Sage Mountain, we are uniquely situated to oversee protection of the fen as it is buffered within a network of forest, wetlands and streams on our extensive botanical sanctuary. Working with state conservation officials, we are able to closely monitor the groundwater and environs that contribute to the fen’s health, while our private sanctuary status protects the land from development and human activity.

Our high priority goal for the continued management and conservation of the fen is to rebuild a boardwalk to allow Sage Mountain visitors to safely enjoy the fascinating and beautiful inhabitants of this rare botanical wonderland for years to come.