The Sage Mountain Botanical Sanctuary is home to an abundant community of animal families, including priority megafauna like moose, black bear, fisher, bobcat, and an array of rare bird species, like the Bicknell’s thrush.

These and other animals need large tracts of undeveloped forest to live. By protecting Sage Mountain’s vital wildlife corridor and preserving its sensitive and rare habitats, we hope to foster the environment necessary to not only protect our local wildlife, but also encourage the rebound and return of other species of critical concern like the cougar, gray wolf, and Canada lynx.

Watch our Wildlife in Action!

Watch our Wildlife Wednesday videos to see our wildlife in action! Be sure to subscribe to our channel to receive updates when we release new videos.

The Return of Rare Species

The arrival of European settlers brought significant changes for what would become Vermont’s lands and wildlife. By the beginning of the 20th Century, most of New England’s original forests were cleared for farming. Cougars and wolves lost their homes and were also hunted because they threatened livestock. The last known cougar (also known as mountain lion, puma, or catamount) in Vermont was killed in 1881. The extirpation of the cougar, wolf, Canada lynx and fisher left a predator void that was quickly filled by the bobcat and in more recent years, the eastern coyote.

In 2011, a cougar that had traveled 1,500 from South Dakota was hit by a car and killed in Connecticut. DNA tests on scat confirmed that the lone male walked all the way across Wisconsin, Ontario, and New York looking for a mate. Cougars have already been reportedly sighted in Vermont and New Hampshire and many believe it is only a matter of time before the big cats return. 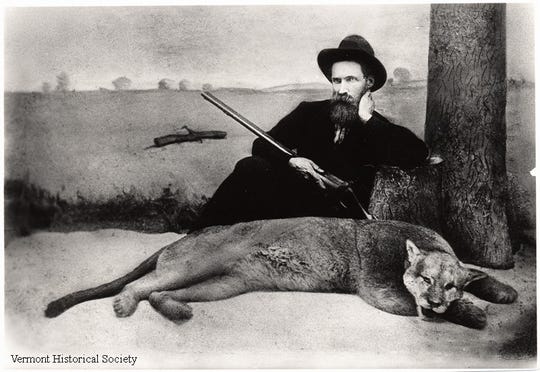 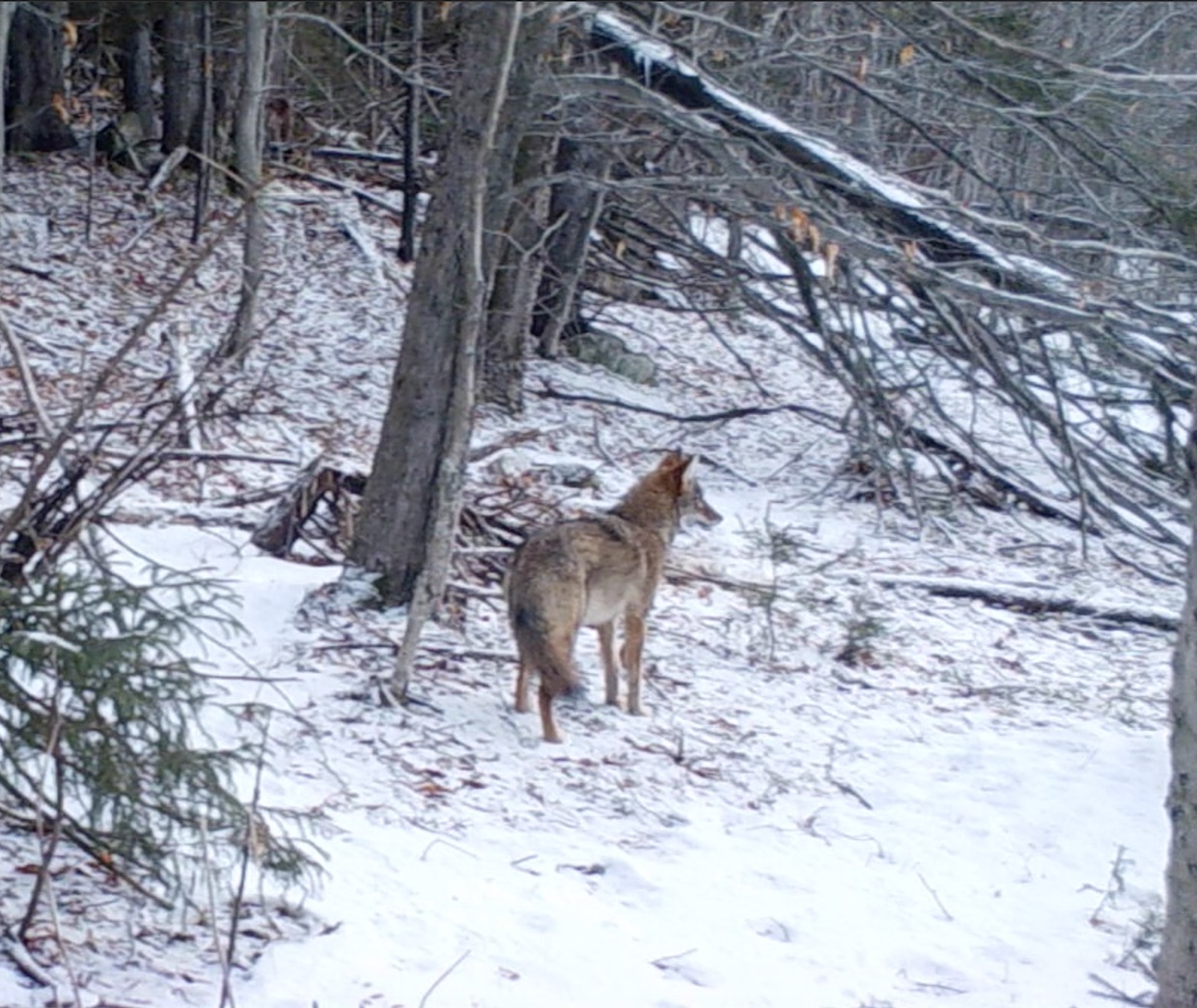 Like most of the lower 48 states, Vermont’s gray wolf population was declared extinct by the early 1900’s. The eastern coyote which roam Sage Mountain share DNA with the gray wolf and domestic dog, having interbred with both as they traveled east of the Mississippi colonizing lands emptied of large predators in the last century. But the gray wolf is another animal already making their way back to Vermont. In 1998 and 2006 wolves were shot in Vermont that, after genetic testing, were determined to be wild.

Two other wildcats can still be found in Vermont, the eastern bobcat and Canada lynx. The smaller bobcat is still relatively common and resides on Sage Mountain. The Canada lynx is nearly extinct and on Vermont’s Endangered Species List. Lynx are yet another animal that requires large tracts of healthy forests, with abundant snowshoe hare populations like those found here and in our adjoining forests. 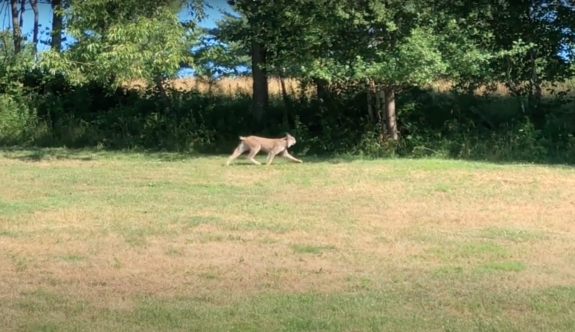 The presence of rare and sensitive wildlife like the cougar, gray wolf and Canada lynx are good indicators of ecosystem health and habitat connectivity. The protection of wildlife corridors like those on Sage Mountain are essential for the return of previously extirpated wildlife relations like the lynx, cougar and even gray wolf. Efforts to protect this habitat may help usher in a new generation of megafauna.

The Effects of Climate Change

Changing weather is an increasing concern for our Sage Mountain wildlife. According to the Northeast Regional Climate Center, March of 2020 was warmer and wetter than in previous years. Statewide temperatures averaged 33°F, which was seven degrees warmer than March of 2019.

Vermont’s flagship animal, the Moose is an indicator species of climate change and ecosystem resiliency. Warming temperatures are hitting these majestic beasts hard, with average daily temperatures increasing notably over the past 50 years. Winters are getting shorter and warmer, contributing to an explosion in winter tick populations. Moose are particularly vulnerable to ticks which cause anemia, hypothermia, and viral diseases in moose, most notably in young calves. A 2019 research study in Vermont on the effects of winter ticks on moose survival fitted 37 moose cows and 90 moose calves with GPS collars to monitor their survival. 74% of the project’s recorded mortalities were attributed to winter ticks, which killed 91% of the collared calves.

Increasing temperatures affect all wildlife. During the limited time moose, bear, and other animals have to bulk up with nourishment for winter, they are increasingly tasked instead with trying to avoid heat (and ticks), which reduces the amount of food they eat, reproduction rates, and immune function.

Endangered birds like the Bicknell’s Thrush, which nest in high-elevation fir trees, are also losing ground to mid-elevation species that are coming higher up the mountain to avoid the increase in warming temperatures. Tree buds and insects that wildlife depend on, are increasingly sprouted and gone by the time migratory birds arrive in the spring.

To better understand the needs of our bioregion’s animal communities with the goal of conserving and restoring the forest lands necessary for their survival, Sage Mountain Botanical Sanctuary uses hikes, neighbor surveys and a network of trail cameras to monitor wildlife activity throughout the year. We work with the Vermont’s Fish & Wildlife Department and state and federal biologists to provide natural resource agencies with detailed records of the value of this wildlife corridor to our wild neighbors and work with local organizations and coalitions involved in state policy advocating wildlife protection. Online and onsite educational programs will also assist landowners in cultivating public advocacy to protect Vermont wildlife and the forests they depend on.

Wilderness is one of the most precious gifts we can leave for nature and future generations. We live in a rapidly changing world, during a difficult and complicated time. We yearn for simpler lives and landscapes, but are sadly resigned to their becoming more cluttered and troubled with each passing generation. Wilderness areas, sacred groves serving as sanctuaries for respite and reflection, have never been more important to our sanity and humanity. Two things are certain: Wilderness will grow more important and valuable with time; and nurturing wilderness recovery, like nurturing other quintessential American values, requires sanctuary.